Want to know more about Spanish food? Here’s a list of traditional food from Spain as well as an introduction to each dish and the Spanish cuisine.

Despite periods of living in Spain, and several trips to various parts of the country, I can’t get enough of Spanish food. I simply love it, and in this article, I will introduce you to some of the most traditional food from Spain.

This is basically the Spanish version of an omelet that is made of potatoes and eggs. It’s also known as Tortilla Española and is typically available in all restaurants across the country.

The dish can be served for breakfast, lunch, or even dinner. It’s common to order some Tortilla Española along with other tapas dishes as well.

Of all the traditional food from Spain, the Gambas al Ajillo is definitely one of my absolute favorites. It’s basically shrimps that have been fried in garlic and olive oil. The dish is typically cooked and served in a clay pot, and most restaurants will serve this.

These garlic shrimps are very popular among both locals and tourists. However, they are typically one of the more expensive items on the menu, but definitely worth to order.

If you eat meat, I can highly recommend Rabo de Toro, which is a Spanish stew made with oxtail that has been slow-cooked. It comes with a rich flavor and typically includes potatoes as well.

The dish originally comes from Andalucia.

Albondigas are Spanish meatballs that are typically served in tomato sauce in a bowl. It’s a tapas dish and not something that you would eat on its own as a main course.

Pulpo a la Gallega is originally from Galicia, and it’s an iconic dish with octopus. Even if you don’t like octopus or squid in general, I would still say that you should definitely try it at least once.

Spain is well renowned for its cured hams, and both Jamon Iberico and Serrano ham are two classics. There are various standards though, and higher quality can be quite expensive, although there are standards for every budget.

The cured ham can be eaten on its own or with different types of cheese, as well as some melon. Serrano Ham with honey melon is a very nice appetizer that mixes salty and sweet.

Gazpacho is another traditional food from Spain, and it’s basically a cold tomato soup. The origins are still unsure, and there’s no official original recipe, but you can be sure to get a cold tomato soup when ordering a Gazpacho.

It’s great for hot summer days, and it often comes with mixed raw vegetables in the soup.

Both versions are prepared in a similar way in flavorful sauces and are typically served with potatoes or chips, or just as they are. I especially recommend the Carrillada Iberica, which is made of the finest pork cheeks.

This is one of the simple dishes of Spanish cuisine and basically consists of potatoes and salsa Brava. It’s a typical tapas dish and often comes in larger portions to share.

Fish & Seafood is widely available and eaten in Spain, and cod is one of the most popular types of fish, locally known as bacalao. Grilled, fried, salted or lightly breaded cod are all typical ways to prepare the fish.

In addition to garlic shrimps, the Padron Peppers is another favorite food from Spain that I can’t get enough of. Pimientos de Padron are eaten all over the country, and it’s a popular tapas dish.

Furthermore, they are available in most supermarkets and are very easy to cook at home. Simply fry them in olive oil and salt them generously with sea salt.

This is not my favorite food from Spain, but it’s nonetheless traditional. Croquetas are available in most restaurants and come with various fillings. Cheese is a common filling as well as ham.

Paella originally comes from Valencia but is eaten all over the country these days. Most foreigners who think about Spanish food will likely mention either Paella or Tapas, and it’s a quintessential dish from the Spanish kitchen.

Many families will have their own Paella recipe, but it typically includes rice, seafood, and a lot of saffron.

Spanish Cuisine has a great regional variety, and only a few dishes are served across the whole country. Some dishes that are eaten all over Spain might also come with regional differences and modifications to the recipe.

With that said, food is an integral part of the Spanish culture and lifestyle. Tapas is a widespread concept and you’ll find plenty of tapas bars serving small appetizers to share with friends and family. Tapas is also one of my favorites when it comes to food from Spain.

Spanish cuisine has a lot of interesting flavors, and the chefs in Spain take great pride in their creations. Fish and Seafood, as well as various types of meat, are all very important ingredients in traditional Spanish food.

What is the national dish of Spain?

Paella is one of the most well-known dishes from Spain, and it’s often considered as the Spanish national dish.

Is food from Spain healthy?

In general, Spanish food is considered to be healthy and follows much of the typical Mediterranean diet and lifestyle. Meat is well mixed with vegetables, and there’s a focus on quality products without excessive sugar.

Other Spanish food items that you should try

What is a typical breakfast in Spain?

The Spanish word for breakfast is “El Desayuno” and contrary to other countries, it’s not the most important meal of the day in Spain. Below are some common food items that might be served for a typical Spanish breakfast.

On Sundays, it’s a tradition for many to eat churros with chocolate for breakfast.

Just like the food, there are many Spanish desserts that are served regionally, even though Flan and Churros are found all over the country.

Christmas in Spain is a time for families to come together. Not everyone will eat the same for Christmas food in Spain, but below are some common dishes that are typically eaten around Christmas.

Do you have a favorite food from Spain? Leave a comment below! 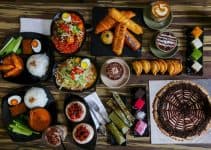 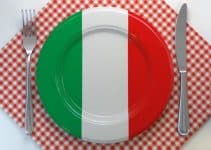 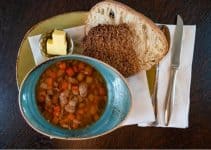