Want to know more about traditional cakes and desserts from Spain? Here’s a list of Spanish desserts that you should definitely try on your next trip!

Flan is one of the most iconic desserts in Spain, and it’s basically a kind of custard with caramel sauce. Flan is available all over the country and can also be called Crema caramel, and the most common flavor is vanilla.

If you’re traveling to Catalonia, you should definitely try some Crema Catalana, which is a regional classic. It can be described as the Catalan version of crème brulée, which is a French dessert.

It’s characterized by its crust with burnt sugar on the top and creamy custard.

Tarta de Santiago is one of the oldest Spanish desserts, and it dates back to Medieval times. The ingredients are eggs, almonds, sugar, sweet wine, lemon zest, and some grape marc or brandy.

As you can guess from its name, the Tarta de Santiago comes from Santiago de Compostela in Galicia. The city is famous for being the end stop for the ancient pilgrimage route Camino de Santiago.

The cake has an imprint of the Cross of Saint James on top as well as powdered sugar.

Natillas de Leche is another iconic dessert from Spain, also known as Spanish custard. It has a rich vanilla flavor with hints of cinnamon and lemon.

Natillas is also a term for all custard desserts in the Spanish speaking world.

This is the Spanish version of cheesecake, and it’s served all over the country, with some regional varieties.

If you like nougat, you should definitely try some Turrón if you happen to visit Spain during Christmas. It also makes a nice souvenir to bring back home as it has a long shelf-life.

The main ingredients in Turrón are almonds, sugar, honey, and egg white. These days, it’s one of the most classic Spanish desserts, but it has Moorish origins.

Mantecados is also served during Christmas time, and it’s a favorite among the Spaniards. You won’t find many homes in Spain without Mantecados for Christmas, and it’s a tradition that goes way back in time.

Originally, these crumble cakes came to be due to a surplus of lard. You can make these at home, or if you’re traveling to Spain during Christmas, you can buy them at bakeries.

Ensaimada is a typical cake from the Spanish island Mallorca. Its origins date back to at least the 17th century when it was first mentioned in writing.

The main ingredients of the Ensaïmada are flour, water, sugar, eggs, and saïm, which is pork lard. In addition to Mallorca, it’s also eaten in Latin America and Southeast Asia. The pastry is served cold and is typically made for celebrations and festivals.

If you want to try a Spanish dessert with alcohol, you should try some Tarta de Whiskey. It’s best homemade but you can order it at some restaurants as well, and it’s a local favorite.

If you’re a fan of marzipan, custard, and sugar, then you should head for Segovia, which is a historic town located north of Madrid. This is one of the newest Spanish desserts, and it is said to have been invented in 1926.

It quickly became a favorite of King Alfonso XIII who helped spread the word about it across the country. Unfortunately, it can be tough to find the delicious treat these days, but if you go to Segovia, you can find it in local bakeries.

Torrijas a Spanish style toast, which is also known in other countries as gypsy toast or poor knights. It’s a simple dessert dish that is especially popular to eat during Lent and Easter.

Torrijas are served all over Spain, and it’s popular to add syrup, honey or cinnamon on top as well as sugar.

Churros is a favorite street-snack in most Spanish speaking countries, and you can find stalls selling churros all over Latin America.

The churro has Spanish and Portuguese origins, and it’s basically fried dough. You can dip it into sugar or chocolate. Having some churros with chocolate is a local favorite in Spain, which is typical for Sunday morning breakfasts.

What is a typical dessert in Spain?

Flan is the most typical dessert with Spanish origins, and it’s served in restaurants across the whole country. Some other typical Spanish desserts are ice cream (helado) and fresh fruits, besides the already mentioned ones.

More about Spanish desserts and cakes

Just like the Spanish cuisine in general, there are many regional varieties when it comes to Spanish desserts. Each region has their favorite pastries and cakes as well as unique ways to prepare them after tradition.

You can find churros and flan all over Spain as well as Arroz con leche and Tarta de Queso. Ice cream and fresh fruits are also eaten across the country, but besides these desserts from Spain, what’s on the menu, is heavily influenced by the region.

Are churros from Spain?

Churros are eaten in all Spanish speaking countries, and it’s one of the most iconic desserts from Spain. You can find them sold in stalls at markets or in the cities. On Sundays, it’s common to spoil yourself with some churros and chocolate for breakfast.

What is the national dessert of Spain?

Flan is considered as the national dessert of Spain.

What is a good Spanish dessert to serve with paella?

It’s a good idea to serve a lighter dessert after eating paella since it’s a heavy meal with many flavors. I suggest ice cream or flan.

What is the word for cake in Spanish?

A cake or pastry in Spanish is called “pastel” or “tarta”. And if you want to say cookies, you can use the world “galletas”.

Which is your favorite dessert from Spain? Leave a comment below! 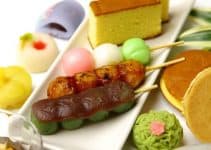