Want to know more about traditional food from Iceland? In recent years, tourism has boomed in the Nordic island nation, and visitors from all over the world come here to explore the beautiful nature and watch the northern lights.

As a food lover, you will also be pleased that there are many unique dishes to eat in Iceland. In this article, we will share some classics along with more information about Icelandic cuisine.

Svið or sheep’s head in English is perhaps not the most appealing food from Iceland, but it’s a dish that has been eaten traditionally for centuries. These days, however, it’s not commonly eaten, but sheep’s head is still served in restaurants.

It’s typically smoked and served whole on the plate with mashed potato. The cheeks are said to be the best meat you can ever eat. If you like to try unique dishes from around the world, the Icelandic Svið shouldn’t be missed while visiting Iceland.

Harðfiskur is a common snack that is best eaten with some butter and rye bread. It’s basically dried fish, and although it has a pungent smell, I would say that it’s quite tasty.

You can buy this in any supermarket across the country, and it’s available throughout the year.

If you like meat soups, you should definitely try the Kjötsupa, which literally means meat soup in the local language. It’s a popular dish to eat during the winter months, but it’s available year-round.

It’s a simple dish that is very rich in flavor.

Plokkfiskur is basically boiled cod or haddock fillets, which is served with potatoes. It’s a kind of fish stew that is very popular among the locals, and perhaps one of the most appetizing dishes from the Icelandic cuisine.

Many families will have their own version of how to make Plokkfiskur.

Hakarl, also known as fermented shark meat is another traditional food from Iceland. The shark meat comes from sleeper sharks and the Greenland shark, and it’s available across the whole country.

It’s known for having a strong flavor, and some say that there is a kind of ammonia taste to it. You can buy hakarl in supermarkets, and some restaurants will also serve it.

Hakarl is available all year-round and it’s definitely one of the most traditional things to eat in Iceland.

Fish and seafood are dominant within the Icelandic cuisine, and there are so many varieties of fish that you can eat. Some 340 species of saltwater fish have been recorded, and below are some of the most commonly eaten species.

Furthermore, salmon is another type of fish that is commonly eaten by the locals, and there are three Icelandic species of salmon. If you order this at a local restaurant, you’ll likely get it fresh, and perhaps even from the catch of the day.

Hrutspungar is another unusual dish in the Icelandic cuisine that will give you memorable food experience. The dish is basically made of Ram’s testicles, and it’s a local favorite.

Pylsur is a typical street food in Iceland that you will find in kiosks and gas stations. However, don’t expect them to come cheap, at least not by international standards. An Icelandic hot dog will set you back 5-7 USD.

Icelandic Yogurt is known as Skyr and it’s available everywhere. It’s truly a staple when it comes to breakfast in Iceland, and it’s a great choice for budget travelers as well. It’s packed with protein and comes at a reasonable price, in an otherwise expensive country.

Skyr comes in various flavors and there are also different brands available in the supermarkets.

If you like to try national spirits while traveling to another country, you should try Brennivin, which is the national liquor of Iceland. Locally, it’s nicknamed “The Black Death” and it’s a very strong liquor.

It has a similarity with Akvavit, which is a liquor from Denmark, Norway, and Sweden. You can order a glass of brennivin at most restaurants, or you can buy it at “vinbodin” which is the national liquor store in Iceland.

Rye Bread is eaten all over the Nordics, and Iceland is not an exception. However, there is one particular type of rye bread that is baked in a special way.

The Dark Rye Bread from a Hot Spring is a classic bread that shouldn’t be missed while visiting.

Beef, Pork, Chicken, Lamb are all common types of meat that is eaten around the world. For some, it might not make a difference as to what animal the meat comes from, but there is some controversial food from Iceland which is quite unusual to eat.

Whale meat is a traditional food from Iceland which is quite controversial and upsetting for many tourists. It’s a practice that has been on-going since the 12th century where Icelanders hunted whales with spears.

Current whaling regulations state that only fin and minke whales are allowed to be hunted. In Icelandic restaurants, it’s mostly the minke that will be available, wheres the meat from fin whales is exported to Japan.

The biggest demand for whale meat comes from tourists though, and most Icelanders don’t eat whale meat.

Puffin is another controversial food from Iceland which is served in local restaurants. With that said, Icelanders don’t typically eat puffin at home, and throughout history, it has mostly been eaten when food was scarce.

Puffin meat is typically served smoked in restaurants, and it is said to have a strong flavor.

More about Icelandic Food and Cuisine

Fish has been a part of Icelandic cuisine since the first settlers in the age of the Vikings. Fish and Seafood dishes, in general, are very common due to the abundance available along the Icelandic coasts. In addition, lamb has long been a staple along with bread and potatoes.

A lot of the food from Iceland is eaten in other Nordic countries as well, and the original settlers were from Norway, so the Icelandic cuisine does have many similarities with Norwegian and Scandinavian cuisine.

Furthermore, international food is available in most restaurants in Iceland. Icelanders themselves often eat traditional food at home rather than in restaurants. But for tourists, there is also a wide range of restaurants in Reykjavik and other cities which serve local food.

What is your favorite traditional food from Iceland? Leave a comment below! 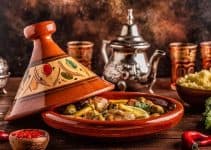 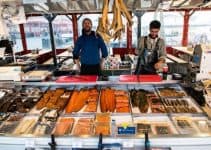 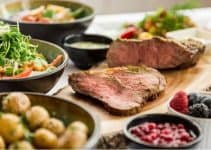